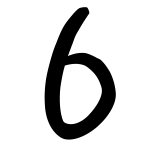 According to numerology, Ava is associated with the number 6. The number of personality 6 indicates the nature of the character, the manifestations of which are perceived by others is far from unique. A person who turned to the "six" for advice and support can be sure that the phrases "these are your problems" will not be answered. On the contrary, the "six" will surely show sincere participation, willingness to help, to do everything in its power. But further complications begin.